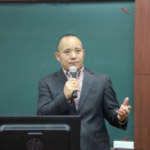 One of China’s most prominent economist Dr. Xiang recently explained the current dollar-system in his McKinnon Lectures titled; The Collapse of the International Monetary System, in Beijing in 2016. I met Dr. Xiang a few times in the last few years and I know he has read The Big Reset with great interest. He can be seen as a representative for the younger and much more ‘militant’ generation of Chinese economist. He has expressed some strong criticism on the US and is not a supporter of the SDR-solution.

In his recent talk organized by the Chinise International Monetary Institute, one of Chinese highest ranked monetary think-tanks he used some very strong words to explain the current dollar system. We will quote an official IMI-publication;

Dr. Xiang Songzuo emphasized that the dollar-standard system has brought almost unlimited benefits to the United States. This system created “super hegemony” and “super interest” by issuing banknotes, creating inflation, creating credits, manipulating the exchange rate and dominating the international monetary system. The root cause of the internal imbalance in the global economic structure is the dramatic change in the internal structure of the global economic system over the past 40 years (sinds dollar-gold collapse). That is, the global economy began to change from industrial capitalism to global financial capitalism, and the financial industry continued to grow at a high speed, faster than the growth of the real economy. Many countries in the world adopt a floating exchange rate—this has never happened before in the history of the currency system. Only in the background and framework of floating exchange rates and the dollar standard system, can we understand the trend of RMB exchange rates. The core of RMB internationalization is the internationalization of financial markets, financial institutions and the cross-border inter-bank payment systems (CIPS). In the short term, the international monetary system will be in a disorderly and chaotic “Warring States Period”. The status of the RMB will gradually or even rapidly increase, but for a long time the dollar will still be the major reserve currency in the world. He believes that global financial capitalism will continue to expand, and asset bubbles, financial crises and the economic imbalance will continue to deteriorate until a major turning point appears. When it happens, human beings will restore the economic, financial and monetary order.

These words bring me to Michael Hudson who has explained this all so well in his wonderful book The Super Imperialism. According to him the US is able to rule not through its position as world creditor, but as world debtor. America’s weakness as a debtor country has indeed become the foundation of the world’s monetary and financial system.

Another Chinese market commentator described the current dollar-system in the following way:

‘World trade is now a game in which the US produces dollars and the rest of the world produces things that dollars can buy […] a dollar hegemony that forces the world to export not only goods but also dollar earnings from trade to the US […] Everyone accepts dollars because dollars can buy oil.’

Another Chinese observer once stated:

‘The military power more and more plays a role of the guardian of the money (power). If any potential factor poses a threat to the operation of the dollar hegemony mechanism, the gigantic military machine might start, thus shifting the American hegemony from the ‘benign hegemony’ into a ‘dangerous hegemony’. Some have even said that the US (the West) has now entered an era of ‘fictitious capitalism’, in which the inflow of capital is of vital importance for it to maintain its global primacy.

Only when dollar-holding nations decide to buy natural resources instead of US treasuries, is the dollar’s reserve currency status in danger. This is exactly the exit strategy China and Russia seem to be playing right now. In recent years, the Russians have sold most of their dollar holdings, while they tripled their gold position. The Chinese have stopped buying extra US Treasuries since 2010 while they have imported and invested in huge amounts of gold and other hard assets.

This all clearly shows China does understand the dollar’s endgame and is preparing for the next phase of world’s monetary system.