War on Gold and the Financial Endgame

A system reset seems imminent. The world’s financial system will need to find a new anchor around 2020. Since the beginning of the credit crisis, the US realized the dollar will lose its role as the world’s reserve currency, and has been planning for a monetary reset. This reset will be designed to keep the US in the driver’s seat, allowing the new monetary system to include significant roles for other currencies such as the euro and China’s renminbi. Gold could well be re-introduced as one of the pillars of the new global financial system. By looking past the American ‘smokescreen’ surrounding gold and the dollar long ago, China and Russia have been accumulating massive amounts of gold reserves, positioning themselves for this more prominent monetary role for gold in the future. The reset will come as a shock to many. The Big Reset will help everyone who wants to be fully prepared.

The Big Reset is a worldwide bestseller, currently available in English, Chinese, German and Dutch. In 2016 Portuegese, Polish and Arabic editions will become available.

Eric Sprott: ‘This is a wonderful history and description of gold and it would be in everyone’s interest to understand it’s conclusion”  (for more reviews scroll down)

Middelkoop predicted the onset of the credit crisis in his first book ‘Als de dollar valt’ (When the dollar falls) – 2007. Subsequent publications were ‘De permanente oliecrisis’ (The permanent oil crisis) – 2008, ‘Overleef de kredietcrisis’ (Surviving the credit crisis) – 2009, ‘Goud en het geheim van geld’ (Gold and the secret of money) – 2012, and his first book printed in English The Big Reset – 2013. In total, he sold over 100,000 copies of his books. 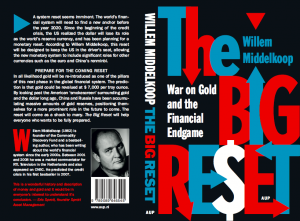 More reviews for The Big Reset;

Willem Middelkoop was, like Nouriel Roubini, one of the very few to predict the crisis. Willem Middelkoop makes the compelling case that this new monetary system is concocted in a big deal between the two financial world powers: the US and China.’

The Big Reset” describes some historical stories during evolution of the international financial system, as well as “mysterious” forces behind the scene. It is an alarm for China undergoing RMB internationalization: the formation or reconstruction is not purely financial or economic problems, but we must face the broad international governance issues.

I was delighted to discover this book, which is highly accessible to the average reader. It contains a minimum of financial jargon; instead, it provides very clear and careful exposition of each area contributing to the overall problem. It is as if the author constructs a large mosaic by building out each important individual subject first, and then assembling these into an otherwise complex composition, so at the end you can stand back and fully comprehend (and accept) the complete picture. I furthermore can attest to the balance and accuracy of most all of those sources. Now I no longer waste time explaining the coming monetary reset and its significance to friends, I just advise them to buy this book. Buy this book. Much more importantly, read it.

Willem Middelkoop and “The Big Reset” is right in the thick of the action! Great book; awesome statistical reference to go along with the analysis.

– James Rickards, author of “The Death of Money” and “Currency Wars”

An outstanding book about the coming transfer of the economic world power due to the decline of the world supremacy of the United States. Written from an economic point of view it leads to the same result as in the famous book of the late Harvard Professor Samuel Huntington “The Clash of Civilizations”.

Great material! I am fascinated by your analysis on the miscalculation of inflation and historical episodes of QE.

Willem Middelkoop, author of the book, predicts that in coming 5-10 years, the world economic system will go through a big reset which will redefine the financial system and change the position of various currencies. According to Meng Chao, Deputy Director of Renmin University Publishing, ‘The Big Reset’ breaks the norm of standard academic books in both content editing and formatting design, and the publishing house aims to launch the book as an academic best-seller.

Middelkoop believes that in the coming 5-10 years, the world financial system will go through a significant big reset, and the position of various currencies will be changed. Ren-min-bi will increase its importance internationally. Middelkoop thinks his point of view as well as how he came to his conclusion, is worthwhile for Chinese readers to understand and contemplate.

The main claim of the author is that the U.S dollar is in trouble and a collapse of the world’s default currency is imminent. His book predicts a dramatic change in world economics that many of the largest nations are already planning and preparing for. Whether he is right or wrong is still a matter of debate, but the book has hit a nerve with readers around the world.

Self-made man Willem Middelkoop is a well known personality in the Netherlands. He has been a peak oil and financial Cassandra for several years and is often invited in the media. He ran a successful online gold business before he sold it. He is very active on twitterand as such one of the most interesting news sources in all things finance, politics and many other areas, mostly in English. His latest book, The Big Reset, is an international bestseller and translated in many languages. It is about the inevitability of the collapse of the international financial fiat money system and the dollar in particular. Unsurprisingly, he is a gold bug and expects that metal to play an important role again in the world of finance after the crash.

‘We are very happy with this new international success for The Big Reset, which has been selling really well. The book has been a bestseller on Amazon, and after one weekend was among the 600 best selling books worldwide.’

We’re very proud to publish the German language edition of “The Big Reset” by Willem Middelkoop.  When it came to my desk, I thought “Well, just another book on economics and the crisis”.  But this one is different. Willem Middelkoop is describing the history, the current economic and political situation as well as the possible future in a clear, easy to understand way. He is putting together the pieces of the puzzle and in the end the reader will see a complete picture that allows him to understand why the big players in this global economic game are acting like they do.

In contrast to the mainstream viewpoint prevailing in the U.S., Mr. Willem Middelkoop’s new book The Big Reset shows an influential European economist and observer’s insight on how the world’s financial system and order will be transformed in the following decade. It is a shared notion in China’s financial and academic sphere that the following ten years mean a significant opportunity for China, whose role and position in the world’s currency and financial system will undergo fundamental changes. As to the question of what kind of changes and why the changes will take place, we hope this extremely popular book will enlighten our readers.