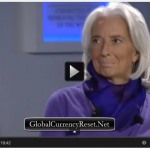 We now have a second video (kuddo’s to http://globalcurrencyreset.net ) in which Christine is promoting the reset-concept. It is quite clear, IMF’s Christine Lagarde has a ‘BIG RESET’ on her mind.

She actually mentions ‘reset’ more than ten times in a 2.30 minutes time frame. By using the R-word again and again she demonstrates the roll out of a IMF-strategy to prepare us for a coming change in the world wide financial system.

He some of her remarks;

“The financial sector regulatory environment has to be finalized and has to be constantly reexamined, reformed and organized in such a way that it responds to the creativity on the financial markets, that’s reset number one.

“Reset number two ..  is a reset of the monetary policies by most central bank of the advanced economies. They’ve been going into unconventional territories. They’ve have done a great job at keeping the crisis at the level where it was, but now gradually they’re going to have to move to another monetary policy.”