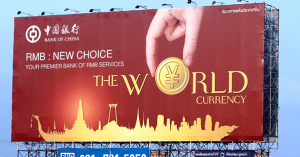 One day the current fiat dollar reserve system will have to be replaced with something new, probably the IMF’s Special Drawing Rights (SDR), with or without some form of gold-backing.

The SDRs, a new form of international reserve assets, were designed by the IMF in 1969, to take over the dollar’s role as a world reserve currency when needed. Soon after the fall of Lehman late 2008, the United Nations called for ‘a new Global Reserve System’ based on SDRs.

Such a new Global Reserve System–what may be viewed as a greatly expanded use of SDRs, with regular or cyclically adjusted emissions calibrated to the size of reserve accumulations–could contribute to global stability, economic strength, and global equity, according to the UN.

After the start of the credit crisis China felt the renminbi’s dependency on the dollar was problematic and they claim to be ‘trapped’ by the huge size of its dollar holdings. So China has been looking for an exit strategy ever since.

In a 2009 speech, Governor Xiaochuan of the People’s Bank of China (the Chinese central bank) called for a new worldwide reserve currency system. He explained that the interests of the US and those of other countries should be ‘aligned’, which is not the case in the current dollar system. Xiaochuan suggested developing SDRs into a ‘super-sovereign reserve currency disconnected from individual nations and able to remain stable in the long run’.

The OMFIF, a leading monetary think tank based in London, has also called for extending the SDR to include the so-called R-currencies – the renminbi, rupee, real, rand and ruble – and even possibly gold. Economist and Nobel prize winner Robert Mundell, one of the architects of the euro and an advisor to the Chinese government thinks a gold-linked SDR could be used to reset the international monetary system:

‘There could be a kind of Bretton Woods type of gold standard where the price of gold was fixed for central banks and they could use gold as an asset to trade within central banks. The great advantage of that was that gold is nobody’s liability and it can’t be printed. So it has a strength and confidence that people trust. So if you had not just the United States but the United States and the euro (area) tied together to each other and to gold, gold might be the intermediary and then with the other important currencies like the yen and Chinese Yuan and British pound all tied together as a kind of new SDR that could be one way the world could move forward on a better monetary system.’

There are some who explain China’s rush to build up its gold reserves, just updated from 1000 to 1600 tons, by inferring that the US would prefer to revalue gold together with the EU and China, instead of going it all alone. As soon as China’s gold reserves as a percentage of GDP reach the same level as those of the US and the EU, the three powers could lead the world in a smooth transition to a system based on SDRs with a form of gold backing as proposed by Mundell and the IMF.

‘Under the current valuation method, the SDR currency basket is reviewed every 5 years. The last SDR valuation review was conducted in 2010. The review concluded that four currencies (euro, Japanese yen, British pound, and U.S. dollar) would continue to comprise the SDR basket. At that point China the renminbi (RMB) was not included in the SDR basket as it was not judged to be freely usable and thus did not meet the second selection criterion’, according to a statement on the IMF’s website.

But now after years of study and negotiations – remember Christine Lagarde’s 4 day-trip to China in March this year – the IMF will decide for an extension of the current valuation basket for a period of nine months to September 30, 2016 and will make a formal decision about the new currency basket before the end of 2015.

According to the IMF:

‘This proposal would respond to concerns expressed previously by SDR users that introducing a new basket on the first trading day of the year can expose them to increased risks and costs. It would also help reduce uncertainty for SDR users and facilitate continued smooth SDR-related operations, while allowing adequate time to make necessary changes to contractual arrangements, including in the event the Board ultimately decides to add a new currency (RMB-WM) to the basket.’

From these statements it becomes quite clear that the chances are very high the IMF will include the RMB in a new SDR currency basket, not on January 1st 2016, but nine months later. This is more or less confirmed by the following quote by senior IMF officials during a conference call;

IMF official: ‘.. coming towards a decision by the end of the year, but waiting for the implementation till next year.’

With this reference to implementation, the decision already seems to be made. Why else would anyone discuss a pending implementation if no major changes were to be made to the currency basket? We hope Beijing will read the IMF statement the same way and they will have the patience to wait another long year.