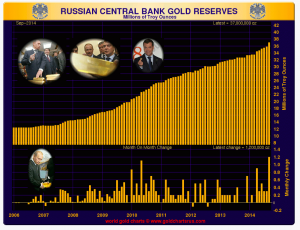 Gold is making a remarkable come back into our financial system. Russia and China are openly accumulating gold in an aggressive way, while India has been confronted with huge gold demand, even leading to large trade deficits.

In Europe Germany, Switzerland, France, Belgium and the Netherlands are in the process of repatriating gold or discussing it. On top of this even the ECB stated they could buy gold, probably in an effort to fight deflation.

You could say a new gold standard is being born without any formal decision. At least that’s how the well influential the international business editor of The Telegraph, Ambrose Evans-Pritchard, described the ongoing efforts by countries to lay their hands on as much physical gold as possible last year.

‘The world is moving step by step towards a de facto Gold Standard, without any meetings of G20 leaders to announce the idea or bless the project… Neither the euro nor the dollar can inspire full confidence, although for different reasons. EMU is a dysfunctional construct, covering two incompatible economies, prone to lurching from crisis to crisis, without a unified treasury to back it up. The dollar stands on a pyramid of debt. We all know that this debt will be inflated away over time – for better or worse. The only real disagreement is over the speed… The central bank (gold) buyers are of course the rising powers of Asia and the commodity bloc, now holders of two thirds of the world’s $11 trillion foreign reserves, and all its incremental reserves. It is no secret that China is buying the dips, seeking to raise the gold share of its reserves well above 2%. Russia has openly targeted a 10% share. Variants of this are occurring from the Pacific region to the Gulf and Latin America. And now the Bundesbank has chosen to pull part of its gold from New York and Paris. Personally, I doubt that Buba had any secret agenda, or knows something hidden from the rest of us. It responded to massive popular pressure and prodding from lawmakers in the Bundestag to bring home Germany’s gold. Yet that is not the end of the story. The fact that this popular pressure exists – and is well-organised – reflects a breakdown in trust between the major democracies and economic powers. It is a new political fact in the global system.’

He also quotes Mohammed El Erian, Pimco’s former chief investment officer, who is afraid that the repatriation of gold might lead to a growing international mistrust in our financial system:

“In the first instance, it could translate into pressures on other countries to also repatriate part of their gold holdings. After all, if you can safely store your gold at home — a big if for some countries — no government would wish to be seen as one of the last to outsource all of this activity to foreign central banks. If developments are limited to this problem, there would be no material impact on the functioning and well-being of the global economy. If, however, perceptions of growing mutual mistrusts translate into larger multilateral tensions, then the world would find itself facing even greater difficulties resolving payments imbalances and resisting beggar-thy-neighbour national policies.’

The current development reminds us of the implosion of the London gold Pool in 1968.

We quote from The Big Reset;

During meetings of the central bank presidents at the BIS in 1961, it was agreed that a pool of $ 270 million in gold would be made available by the eight participating countries. This so-called ‘London Gold Pool’  was focused on preventing the gold price from rising above $ 35 per ounce by selling official gold holdings from the central banks gold vaults.

The idea was that if investors attempted to flee to the safe haven of gold, the London Gold Pool would dump gold onto the market in order to keep the gold price from rising. During the Cuban Missile Crisis in 1962, for instance, at least $60 million in gold was sold between 22 and 24 October.  The IMF provided extra gold to be sold on the market when needed.

Contributions to the London Gold Pool per participating country

The participating countries also had to declare that they would not buy gold in the open market from countries such as Russia. In true BIS fashion, these agreements were not put on paper, thereby ensuring complete secrecy. In 2010, a number of previously secret US telex reports from 1968 were made public by Wikileaks. These messages describe what had to be done in order to keep the gold price under control. The aim was to convince investors that it was completely pointless to speculate on a rise in the price of gold. One of the reports mentions a propaganda campaign to convince the public that the central banks would remain ‘the masters of gold’. Despite these efforts, in March 1968, the London Gold Pool was disbanded because France would no longer cooperate. The London gold market remained closed for two weeks. In other gold markets around the world, gold immediately rose 25% in value…The end of the London Gold Pool was the starting shot of a ‘bull market’ in gold which would last for 13 years and which would see the gold price increasing by over 2,500%.

The implosion of the London Gold Pool lead to the breakdown of the Bretton Woods system in 1971 when Nixon suspended gold conversion. Just like 1971 the current flight towards gold will lead to a monetary reset in the years to come, in which gold will take its place as a monetary metal again.