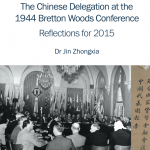 We have found some new confirmation China is discussing a reset of world’s financial system with other ‘leading countries’, just like was done during the Bretton Woods Conference in 1944. In an OMFIF-publication, the second highest ranking Chinese banker within the IMF, Dr Jin Zhongxia stated; ‘The topics currently discussed among the leading countries are not significantly different from those debated at the Bretton Woods conference. Those who open up and learn from the dusty archives of Bretton Woods may perhaps gain insights into many other issues relevant today.’

In a separate op-ed in the August issue of the OMFIF- Bulletin he also acknowledged China is ‘looking to be the next world leader’.

During The Bretton Woods Committee Annual Meeting 2015 a discussion between investor and philanthropist George Soros and Committee Co-Chair James D. Wolfensohn on the future of the Bretton Woods System was organized. Acoording to the Committee’s website; ‘Soros remarked that the Bretton Woods institutions (IMF and World Bank -WM) have now “lost their monopoly,” and the world has broken into two “rival camps.” The extent of cooperation between the new “Beijing Consensus” (e.g. AIIB, etc.) and the existing Western-led institutions will have a profound impact on the world order. Soros also expressed his belief that a stable economic and geopolitical future rested on the transition of China from a production and export-based economy to a domestic consumer and import economy – a transition that the Bretton Woods Institutions and the U.S. should help facilitate by allowing the renminbi to join the IMF’s basket of currencies. In return, China should make concessions to reform including accepting the rule of law. In Soros’ view, this will create a “binding connection” between the two camps and is necessary to avoid the possibility of China aligning itself with Russia and the real threat of a third world war.’