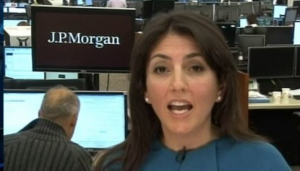 We just received some incredible honest statements from Solita Marcelli, global head of fixed income, currencies and commodities at JPMorgan Private Bank (open only to wealthy investors with at least $5 million of investable assets).

She told CNBC this week that the bank’s analysts are expecting to see gold prices go higher for the rest of the year. ($1400 by the end of 2016). This is a huge shift from the bank’s position early this year when they expected an average annual price of $1,104 for 2016.

Marcelli points to the negative interest rates around the world and said, “Gold is looking more and more attractive every single day. As a non-yielding asset, it has a minimal storage cost, so when you compare it to negative-yielding assets, it actually has a positive carry…Gold is a great portfolio hedge in an environment where world government bonds are yielding at historically low levels.”

She continued by stating that ultimately ‘gold could wind up actually replacing sovereign bonds, long considered the safest of safe places for wealth, as the preferred safe haven for investors’.