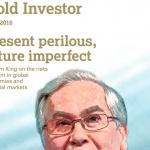 Since the publication of his book the End of Alchemy we knew the former Bank of England president Mervyn King does not longer believe in current monetary policies of creating money out of thin air.

But in a recent interview for a publication of the World Gold Council he goes even further. Under the title ‘Misguided policies and economic risk’ he talks ‘frankly about Europe, global growth and how best to respond to the current uncertain climate.’

Here some of his statements (be sure you’re seated when reading);