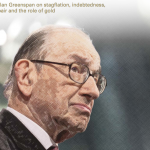 Greenspan has exhibited a keen understanding of the gold in the past. Now that his career at the Fed has ended, ‘the Old Greenspan — the one who defends free markets — has returned.’ In a recent interview with Gold Investor magazine. Greenspan made some interesting remarks on the historical gold standard:

I view gold as the primary global currency. It is the only currency, along with silver, that does not require a counterparty signature. Gold, however, has always been far more valuable per ounce than silver. No one refuses gold as payment to discharge an obligation. Credit instruments and fiat currency depend on the credit worthiness of a counterparty. Gold, along with silver, is one of the only currencies that has an intrinsic value. It has always been that way. No one questions its value, and it has always been a valuable commodity, first coined in Asia Minor in 600 BC.

The gold standard was operating at its peak in the late 19th and early 20th centuries, a period of extraordinary global prosperity, characterised by firming productivity growth and very little inflation.

But today, there is a widespread view that the 19th century gold standard didn’t work. I think that’s like wearing the wrong size shoes and saying the shoes are uncomfortable! It wasn’t the gold standard that failed; it was politics. World War I disabled the fixed exchange rate parities and no country wanted to be exposed to the humiliation of having a lesser exchange rate against the US dollar than it enjoyed in 1913.

Britain, for example, chose to return to the gold standard in 1925 at the same exchange rate it had in 1913 relative to the US dollar (US$4.86 per pound sterling). That was a monumental error by Winston Churchill, then Chancellor of the Exchequer. It induced a severe deflation for Britain in the late 1920s, and the Bank of England had to default in 1931. It wasn’t the gold standard that wasn’t functioning; it was these pre-war parities that didn’t work. All wanted to return to pre-war exchange rate parities, which, given the different degree of war and economic destruction from country to country, rendered this desire, in general, wholly unrealistic.

When I was Chair of the Federal Reserve I used to testify before US Congressman Ron Paul, who was a very strong advocate of gold. We had some interesting discussions. I told him that US monetary policy tried to follow signals that a gold standard would have created. That is sound monetary policy even with a fiat currency. In that regard, I told him that even if we had gone back to the gold standard, policy would not have changed all that much.